What does this painter… 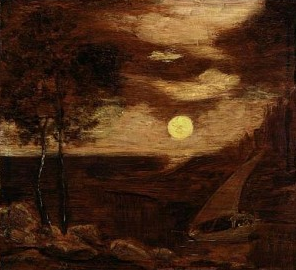 …have in common with this painter?

One of my favorite American painters, Albert Pinkham Ryder (1847-1917), was born in New Bedford, Massachusetts. What a delight it was to learn that painter Albert Bierstadt (1830-1902) was also from New Bedford; the Bierstadt family arrived there in 1851 from Germany. The amazing fact is that families both lived on Mill Street, directly across from the other.

Did the two artists
know each other?

According to Dr. Elizabeth Broun, in Albert Pinkham Ryder, there is no evidence they were acquainted. Given their 17-year age spread, even in later years, they were not likely to have socialized.

Yet, how easy it is to imagine an opportunity for them to meet. Maybe not at first, for Ryder was only a toddler. But later, around 1857-1958, when Bierstadt returned to New Bedford from his travels. Ryder was now 12, and Bierstadt, now 29 offered art classes for a year and one half. Just maybe then did they meet?

THEY ARE BOTH BURIED IN
Rural Cemetery in New Bedford

…And just maybe, if I am lucky, a little bit
of Albert Pinkham Ryder will rub off on me…

© 2014 All rights reserved for content and images where applicable by Peggy Dahl. Some images are copyright-protected by individuals featured in the post or page.